So I know my readers are of varying genders and  ages, but I do believe quite a few are women of a certain age, so I hope this blog will be of interest! The good thing about being a health psychologist is that you can use some of your research skills to “sort out the wheat from the chaff” when looking up articles on the internet.

There are four main triggers for the onset of the menopause:

And there are just three physical symptoms of the menopause:

Some women can be prone to loss of bone density (which can then cause osteoporosis) but this can be improved with regular exercise. All the other symptoms are psychological and can therefore be treated with CBT (cognitive behavioural therapy). So for example if middle aged women become anxious or depressed, it is more likely to do with any of the following (or a combination) and not hormonal changes: bereavement / divorce / empty nest syndrome/ caring for elderly parents/ unemployment. Sleep disturbances can be caused by the anxiety/depression or by the night sweats; and then lack of sleep can  make women more likely to cry and/or be angry/ irritable. So if you find yourself flying into a rage for “no reason” it may be time to get professional help in the form of therapy, because otherwise you might end up a crabby old woman – and we all know one of  those don’t we?! 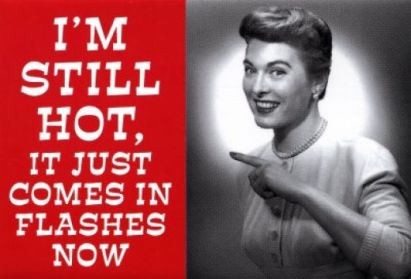