…And I am English therefore will use his proper title: – Father Christmas and not Santa which is American!  It seems that the newspapers are in disagreement about whether belief in him by children is a good thing or not; and both newspapers in question quote from psychologists (obviously different ones); it is the Guardian versus the Telegraph!

The Telegraph thinks it is a bad idea to encourage your children to believe in Father Christmas, as it may mean they will lose their trust in you when they find out the truth. Whereas the Guardian thinks that it is harmless and encourages pro-social behaviour e.g. if Father Christmas and his elves make a limited amount of presents then it will encourage children not to be so greedy. Also there is the question of whether if children stop believing in this benign man will they also stop believing in God too?

Apparently my mother told me at the age of 3 that there was no such person – it was all based on the church’s myths of St Nicholas and that it was actually the parents delivering the presents. She told me this because she didn’t want me to think that the world was such a great place! I don’t remember this conversation and I must have chosen to believe my friends instead, as I grew up believing in Father Christmas until I was about eight years old. It wasn’t traumatic when I found out the truth and neither was it for my children. I do remember a little boy at our school (when we were about 9) who was absolutely sure that we were wrong and that his parents would not lie to him – I think he knows the truth now and still has a good relationship with his parents!

So readers what do you think we should tell our children? 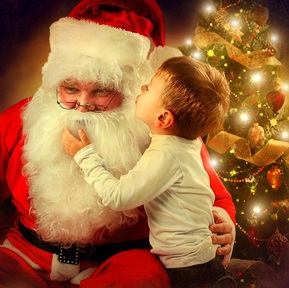